The UK Rock band, The Darkness, gained an instant and large fanbase with the release of their first album, Permission To Land. Released via Atlantic Records in 2003, The Darkness with an energetic and flamboyant lead singer, Justin Hawkins, captured attention with their high-profile stage shows and five singles. They released a follow-up in 2005, which failed to capture the same attention. With six studio albums in release, The Darkness were not slack (despite a lengthy derailment in 2006 until 2011). 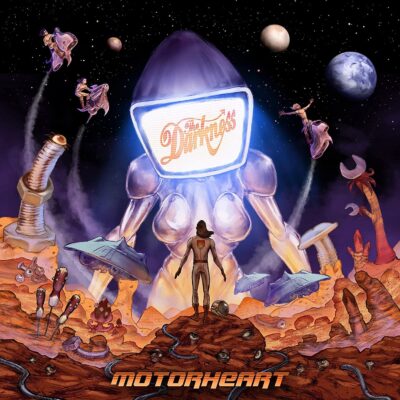 On November 19, The Darkness returns with their next album, Motorheart. Motorheart will deliver 9 songs for the standard CD release. A bonus of three extra tracks will be included on a Deluxe Edition CD package. Two fresh singles are currently in release, “Nobody Can See Me Cry”, and the title track, “Motorheart”. Both can be heard below.

Motorheart will be released on CD, Deluxe CD, DD, CS (orange casing), and orange marble-color vinyl LP. There are a a wide selection of bundling options available as well (here). The Darkness is scheduled to tour Motorheart

Motorheart – The Darkness
01 Welcome Tae Glasgae
02 It’s Love, Jim
03 Motorheart
04 The Power And The Glory Of Love
05 Jussy’s Girl
06 Sticky Situations
07 Nobody Can See Me Cry
08 Eastbound
09 Speed Of The Nite Time
Bonus Tracks (on Deluxe Edition CD)
10 You Don’t Have To Be Crazy About Me… But It Helps
11 It’s A Love Thang (You Wouldn’t Understand)
12 So Long