Sting is one of three of the important blocks found in the highly successful ’80s Pop/Rock band, The Police. Since his departure, he has busied himself with a host of equally successful solo projects. His debut solo, Dream Of The Blue Turtles (1985) sold well over 5 million copies worldwide and produced 5 singles including the mesmerizing “If You Love Somebody Set Them Free”. To date, he has 13 solo adventures, his last being My Songs in 2019. 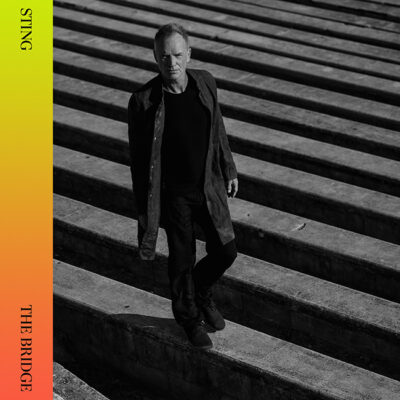 On November 19, he will release his next album, The Bridge. It will contain 10 songs with an additional three on the Deluxe version of the CD. A Japanese release of the album will include one more additional track. A track from the album, “If It’s Love” is in release in front of the arriving album (heard below).

The Bridge will be issued on CD, Deluxe CD, SHM-CD (Japan), DD, Cassette, and vinyl LP.

01 Rushing Water
02 If It’s Love
03 The Book of Numbers
04 Loving You
05 Harmony Road
06 For Her Love
07 The Hills on the Border
08 Captain Bateman
09 The Bells of St. Thomas
10 The Bridge
Deluxe CD Bonus Tracks
11 Waters of Tyne
12 Captain Bateman’s Basement
13 (Sittin’ on) The Dock of the Bay
Exclusive Japanese SHM-CD Edition Bonus Track
14 I Guess the Lord Must Be in New York City *(Japanese exclusive bonus track)