Marianne Faithfull has enjoyed a remarkable career with excellent music that recombines with the times, and generates timeless music. This embraces across decades. It’s amazing that anyone can remain relevant throughout the inevitable change of time. But Marianne Faithfull has been able to do that. 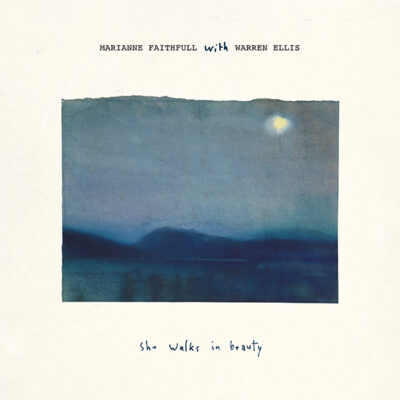 On April 30, Marianne Faithfull will release a collaborative album with Warren Ellis, called She Walks In Beauty. This new album will provide eleven new tracks, all being readings of great Romantic-era poetry by the great poets (Shelley, Keats, Lord Byron, Hood, Wordsworth, and Lord Alfred Tennyson). This album will feature music set to the Faithfull readings as provided by the composer and instrumentalist, Warren Ellis. Warren Ellis is often associated with Nick Cave.

For She Walks In Beauty, others guests have chimed in like Brian Eno, Nick Cave, Head (mixing), and Vincent Ségal (cello). She Walks in Beauty will be available on CD, 2LP, and DD offerings.