Al Stewart Classic, Year Of The Cat, Gets 3CD/DVD Box

It’s ALWAYS pleasant to discover news about a favorite album being remastered and/or expanded. For me, that’s a longtime favorite with Year of The Cat by Al Stewart. Al Stewart has graced the UK folk scene for some years before the release of that iconic and popular album. With classic gems like Past, Present and Future (1973), and the extraordinary Modern Times (1975), including his more previous UK issues, Al Stewart easily paved the wave for Year of the Cat (1976) and his brilliant follow-ups with Time Passages (1978), and more. 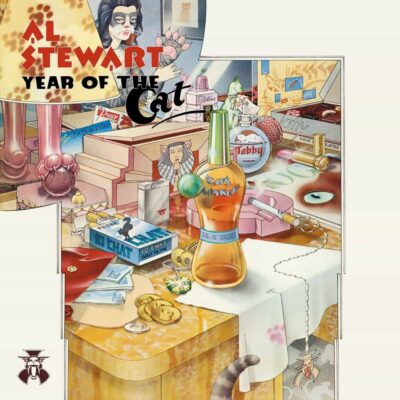 On March 26, Esoteric Recordings UK will unleash a welcome 3CD/DVD Box 45th Anniversary of Year of The Cat that will heartily include a brand new remaster of the album undertaken by the famed Alan Parsons. In addition, new 5.1 Surround mixes as well as a new hi-resolution 96kHz/24-bit Stereo mix of the album are included, also from Alan Parsons.

This 3CD/DVD Box will contain a gracious 68-page book filled with photos, an essay, and photos and credits. The box adds in 4 postcards and a replica poster!

Musically, there are two CDs with two previously unreleased Live at The Paramount shows from the period of the album’s tour. A bonus track outtake is included on CD1 that features the original album remastered.

A 2CD Expanded edition will be made available that will include one of the previously unreleased shows.

CD1 (Year of The Cat Remastered)
01 Lord Grenville
02 On The Border
03 Midas Shadow
04 Sand In Your Shoes
05 If It Doesn’t Come Naturally,
06 Leave It
07 Flying Sorcery
08 Broadway Hotel
09 One Stage Before
10 Year Of The Cat
Bonus Track
11 Belsize Blues (Recorded At Abbey Road Studios In September 1975)

CD2 [Live At The Paramount Theater, Seattle – October 1976 (Previously Unreleased)]
01 Apple Cider Re-Constitution
02 The Dark And The Rolling Sea
03 One Stage Before
04 Soho (Needless To Say)
05 Not The One
06 On The Border
07 Broadway Hotel
08 Roads To Moscow

CD3 [Live At The Paramount Theater, Seattle – October 1976 (Previously Unreleased)]
01 Nostradamus
02 Sirens Of Titan
03 The Post World War Two Blues
04 Year Of The Cat
05 Sand In Your Shoes
06 Carol
07 If It Doesn’t Come Naturally, Leave It

DVD (Year Of The Cat with 5.1 Surround Sound Mix & Original 96kHz/24-bit Re-Mastered Stereo Mix By Alan Parsons)
01 Lord Grenville
02 On The Border
03 Midas Shadow
04 Sand In Your Shoes
05 If It Doesn’t Come Naturally, Leave It
06 Flying Sorcery
07 Broadway Hotel
08 One Stage Before
09 Year Of The Cat