When Van Halen released their debut album, they created a storm of interest. I once attended a Black Sabbath show where Van Halen was the opening act (Aug 14, 1978). When Van Halen left the stage, the new fans clamored for an encore of something…anything. When Black Sabbath took the stage, they struggled to regain control of the crowd, who still wanted more Van Halen. They did regain control but i goes to show the immediate impact the band had on their developing fanbase.

Van Halen went through several lineup changes, all successful. With a collection of twelve studio sets, Van Halen has amassed an enviable collection of singles and deep cuts. 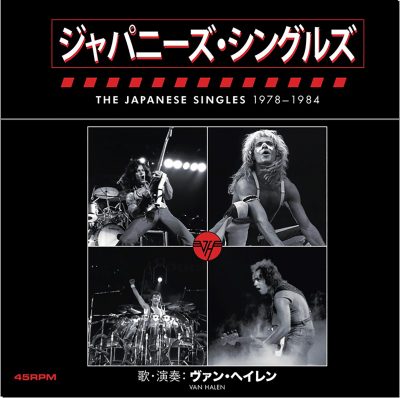 On November 1, Rhino Records will release a vinyl collection of Van Halen singles issued in Japan. The box will be called The Japanese Singles: 1978-1984. Obviously, this set will contain the singles featuring the David Lee Roth-era through the 1984 album.

Features Replicas Of The 13 Singles And B-Sides Released Exclusively In Japan From The Band’s First Six Multi-Platinum Albums.
–
The Japanese Singles 1978-1984 (7” Vinyl Singles Box)
Disc One
A. You Really Got Me
B. Atomic Punk
Disc Two
A. Ain’t Talkin’ ’Bout Love
B. Runnin’ With The Devil
Disc Three
A. On Fire
B. Jamie’s Cryin’
Disc Four
A. Dance The Night Away
B. Spanish Fly
Disc Five
A. Somebody Get Me Doctor
B. Women In Love
Disc Six
A. And The Cradle Will Rock
B. Could This Be Magic?
Disc Seven
A. Unchained
B. So This Is Love?
Disc Eight
A. (Oh) Pretty Woman
B. Happy Trails
Disc Nine
A. Dancing In The Street
B. The Full Bug
Disc Ten
A. Jump
B. House Of Pain
Disc Eleven
A. I’ll Wait
B. Girl Gone Bad
Disc Twelve
A. Panama
B. Drop Dead Legs