The UK band that goes by the name of UFO released two studio sets before charting with their third album, Phenomenon. Phenomenon was released in 1974 and set the stage for their successful UK/US studio sets (Force It – 1975, No Heavy Petting – 1976, Lights Out – 1977, Obsession – 1978, No Place To Run – 1980), and four others through 1985. Their recent A Conspiracy of Stars, issued in 2015, placed appreciably on worldwide charts. UFO – like Angel, Starz, and other similar hard rock bands from that time frame – has a legion of fans. My brother was one of them, which is how I became exposed to UFO. 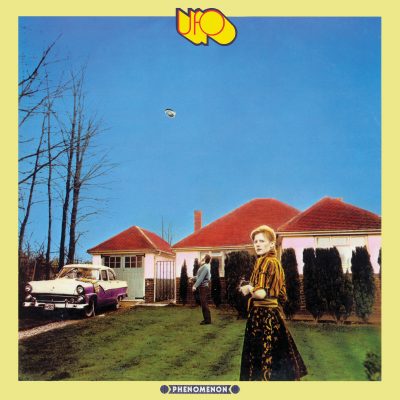 On October 11, Chrysalis Records will release a Deluxe Edition of the jump-starting Phenomenon album with all new 2019 remastering (from original analog masters – by Andy Pearce), and expanded by a collection of 8 live performance tracks from their November 5th, 1974 Electric Ballroom show in Atlanta, GA. The set is being reissued on vinyl 2LP The 2LP set will add a booklet with new sleeve notes and photos.

UPDATE: A 3CD Deluxe Edition of Phenomenon is also scheduled for reissue with a collection of live tracks and a mighty impressive assembly of sixteen demos, single edits, rough and early mixes, and outtakes! All are newly remastered for this impressive set (that we’d like to see continued). The package is housed in an 8-panel digipak and protected by an O-card slipcover. That booklet has to be great as well.

UFO is currently celebrating their 50th Anniversary as a unit. Congratulations, guys!