Arlo Guthrie has great music pedigree when it comes to “following in the footsteps of…”. His father was the great Woody Guthrie. Back in the ’60s, Arlo made a name for himself with his own brand of protest songs. His remembered works include his one Top-40 hit song, his excellent and memorable cover song of Steve Goodman‘s “City of New Orleans”. His Alice’s Restaurant album has become a standard and is his best known album despite his subsequent releases of more than fifteen titles. 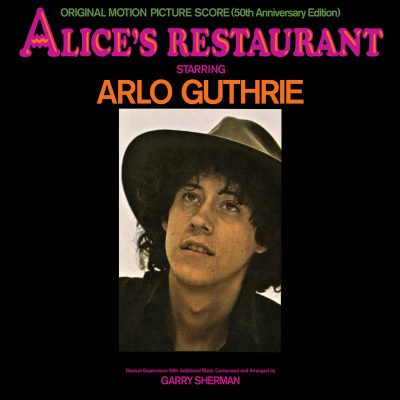 On August 23, Omnivore Recordings will release a 50th Anniversary Edition of the classic soundtrack album, Alice’s Restaurant. this was issued after the release of the 1969 film. This new reissue will feature all of the original tracking songs found on both the original 1969 soundtrack album, and the 1998 update. This 50th Anniversary update will add in a previously unreleased 24-minute live version of “Alice’s Restaurant: Multi-Color Rainbow Roach Affair” from 1968.

The Original Motion Picture Soundtrack 50th Anniversary will add in a booklet with photos, film image shots, new notes, and a new interview with Arlo Guthrie. This 50th Anniversary of the OMPS of Alice’s Restaurant will be offered on CD, DD, and vinyl LP with gatefold jacket.