Adam Green is a wonderfully soft departure from Pop and Folk, and is instead a fresh voice with a light touch on the guitar. His compositions, however, are completely unforgettable. Hear a song once, and your brain is likely to file it in the easiest place to reach for instant access. Previously, he released an excellent album with Binki Shapiro (Rounder Records) back in 2013. His last effort was a soundtrack to his own crowd-funded film, Adam Green’s Aladdin (not to be confused with the current Disney film), which was issued back in 2016. It’s clearly time for more Adam Green. 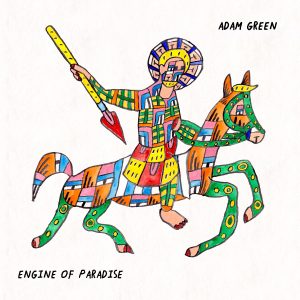 On September 6, 30th Century Records will release the new Adam Green album, Engine Of Paradise. This set of nine new Green compositions will feature Jonathan Rado (Foxygen), Florence Welch, and James Richardson (MGMT). In addition, Adam Green will release his first graphic novel, War and Paradise that will act as a necessary companion to the new album.

Engine of Paradise already has a release track available. You can hear “Freeze My Love” below. Engine Of Paradise will be released on CD, DD, and vinyl LP.

We’d still love to hear a followup with Binki Shapiro as that first album is still in heavy rotation on my stereo.