Manuel Tenchio, who often just goes by the nom-de-guerre Tenchio, is a Uruguayan teenage guitar whiz who plays a kind of mutant math-thrash with reckless abandon. And if his second self-released record — Bedroom Chaos of The Inner Noodle, out recently on Bandcamp – is any indication, he’s either keeping heavily over-caffeinated or battling hefty bouts of ADHD. 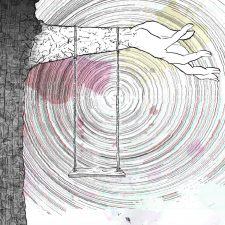 Like similar-minded teen guitar savant Henry Kohen of Mylets, Tenchio displays an amazing, amazing flare for technique. On tracks like “Lettuce Eat Manga,” his intricate finger-work on the fretboard is not just viscous fluid, it’s straight-up mind-blowing. (Dare I mention him? Battles’ Ian Williams, no slouch, would be impressed.) He pulls similar tricks on the closer, “Corgo Deconstruct,” though his weapon of choice on that odd little departure in tone is the keys, not the strings.

The thing that might take math-rock or post-rock traditionalists out there time to digest, however, is just how fast Tenchio darts from idea to idea. He often barely scratches the surface of a particular passage before darting head-strong toward the next zeitgeist. Surprisingly, though, the songs – guitar-heavy and sharply angular, yes, but wonderfully accented with bass, synth and programmed percussion – hold together. Instead of a sonic blur, a kind of mess accentuated by motion, you get a lightning-eyed patch-work of textures and colors. Even on more “conventional” songs – like “Eulogy,” the fifth song, which features airy vocals from Kenta Saito and a verse/chorus/verse structure – Tenchio shreds any sense of norms, in this case, offering up an unexpected and rollicking thrash-metal descent.

Many of the moments on the new, six-composition release echo Tenchio’s most known offering, the jagged-edged and sometimes-almost-funked-up “Turtle Stranger,” from last year’s A.S.S.L.O.A.D LP. That’s good. Tenchio clearly knows what his audience wants. He delivers the goods, if only in a small dosage, on Bedroom Chaos, and proves, if there were any doubt after his 2017 debut, that this Gen Zer has a brilliant record lurking inside of him. Can’t wait for him to exorcize it.