By the time of their third album, The Moody Blues were drastically different people. Denny Laine was, whether he knew it or not, on a collision course with the Band on the Run. In his place, Justin Hayward had made himself irreplaceable on the classic second record, Days of Future Passed. But, if we are being honest, as terrific as the songs on that album are, they were in service to a gimmick.

Deram Records was touting advances in record technology. The Moodies wanted to make a splash. The song-cycle of a day in a man’s life, or his life as seen through the lens of a day, ended up being a sort of magnificent contrivance. The third album would not have the luxury of such crutches, and could not mimic the breakout epic “Nights in White Satin” or else the band might be seen as washed up before they truly started.

The solution was to lean hard into the psychedelic Sixties with In Search of the Lost Chord. A classic in its own right, it is nonetheless a difficult record. The big hit on the album, “Ride My See Saw,” seems out of place and tacked-on to leaven the weight of the whole’s trippy ambitions. 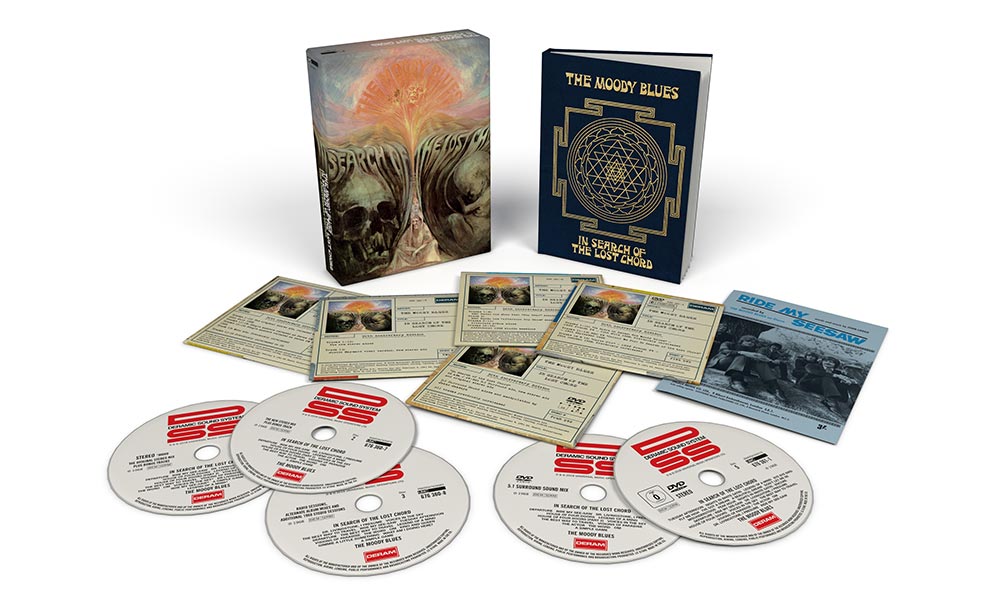 And trippy they are. Drug references both veiled and in plain sight abound. “Legend of a Mind” intones “Timothy Leary’s dead.” References to getting high (flying a kite, of course, wink wink, nudge nudge) and other stationary voyages pop up with whack-a-mole frequency. While the group never launches into Jeffersonian (Airplanian?) psyche jams, they do much with the fades and pans to offer a unique audio dazzle, whether you’re augmented or not.

Because of these, the album is filled with great, but nonetheless dated music. There’s no denying from the content that you’re listening to is a 50-year recording. The sonic quality, on the other hand, is altogether else. Thanks to new methods of transferring analog to digital, sophisticated algorithms to strip away tape hiss while minimally impacting the highs of the audio, and to beef up the bass without muddying the whole thing up, I’ll say that In Search of the Lost Chord has never sounded this good before, even on first vinyl pressings. There is a clarity to certain passages, like the opening “Departure” which offers up Graeme Edge’s customary poem, that shine in this revitalized digital remaster/refresh.

The Universal box set of the album is exhaustive: three compact discs with the album, new stereo mixes, live broadcasts, alternate mixes and more; two DVDs featuring a brand new 5.1 surround mix, archival videos, and so forth, give you your money’s worth. Cool extras include a paperback book detailing the creation and reception of the album and a miniature replica of the sheet music for “Ride My See Saw.”

Is there a catch? Well, kind of. If you are a total Moodies fan, you’ll want the box set. The set is released now in order to flow into gift-buying season. If you are buying the box for someone else, you need to be certain of what Moodies fan you’re gifting to. Those who are completists and have everything from “Go Now” to last year’s mega-box will be thrilled to get this. Those who see the band as proto-progressive rock, thanks to Days of Future Passed and its orchestral and thematic ambitions, may also enjoy the psychedelic twists and turns, but also may not. And fans who focus on the hits will not find something as lushly romantic as “Nights in White Satin,” or punchy as “Question,” or as mainstream as “Your Wildest Dream” in the set. “Ride My See Saw” was the big single from the effort, and in the grand scheme of things, it still lingers more toward the deep cut side than the smash hit side, at least for U.S. audiences. I mention these only because such wide latitudes will affect the enjoyment of said gift.

For the tried-and-true fan, Universal’s box set of In Search of the Lost Chord does everything you could want from one of these single-album retrospectives, offering a last word on a seminal record from the psychedelic era and it’s splintering into the pop and prog realms.