On November 9, MidnightOil will release the live concert document  Armistice Day: Live At The Domain, Sydney, which presents the final gig of their 2017 Great Circle Tour. It will arrive as a DVD/Bluray, and album, and a deluxe collection.

Their first tour in over 15 years, Midnight Oil played in 16 countries, across five continents, bringing the passionate and unrestrained tour to millions who, frankly, never thought such a reunion could happen. Frontman Peter Garrett had served as the Australian Labor Party member of the House of Representatives from October 2004 to August 2013. He served as President of the Australian Conservation Foundation for ten years. Midnight Oil, as a unit, effectively ceased to exist and once someone leaves the stage for politics, they seldom return. 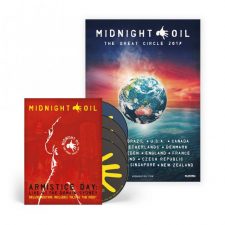 However, in 2016, Garrett did return with his first solo album, A Version of Now, which spurred on gossip and speculation – rewarded a year later with the announcement of Midnight Oil’s reformation and tour only a year later.

As strident supporters of ecological matters, the Oils have been known for their protest efforts all the way back to the start, but most jarringly on their 1990 album Blue Sky Mining. Even then, dismissive critics took to calling the band “prophets of doom.” Yet, according to the BBC, by way of the website The Daily Beast: “The world’s leading scientists have warned governments that there are only ten years left to avoid a global catastrophe. The Intergovernmental Panel on Climate Change (IPCC) unveiled their latest report in South Korea early Monday morning (October 8, 2018), and warned that ‘rapid, far-reaching, and unprecedented changes in all aspects of society’ is needed to keep global temperatures from rising more than 1.5 degrees.”

It would seem that the world needs Midnight Oil’s message now more than ever.

OILS AT THE REEF (EXCLUSIVELY AVAILABLE ON DELUXE EDITION)