Mudhoney, which is now running strong past its 30th year of existence, has never really been that topical. (I mean, c’mon, “Touch Me, I’m Sick” hardly had policy implications.) Leave it to frontman Mark Arm, though, to shake up the established order of things. On the Pacific Northwest band’s new LP  — Digital Garbage, out yesterday on multiple formats via Sub Pop – the grunge icons add an even more biting edge to their delivery with quick takes on multiple newsworthy subjects in the Trump dystopia. 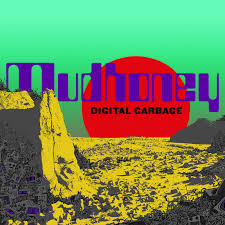 Arm rails against “evangelical hypocrites” and, more pointedly, “sanctimonious pieces of shit” in “21stCentury Pharisees,” which benefits from an addictive, percussive backbone, great synth washes and awesome Steve Turner guitar licks. Elsewhere, he takes on Facebook and social-media fixations (“Kill Yourself Live”) and conspiracy theorists (“Night and Fog”).  Trump and his minions get the slap in the face in “Paranoid Core,” which features the can’t-miss chorus of “I stoke the fire in your paranoid core/I feed on your fear.” (Side note: another epic Turner solo.) “Please Mr. Gunman” is surprisingly nuanced for a piece on gun control in the post-Parkland era, a take on someone pleading with an active shooter. (“We’d rather die in church,” Arm wails repeatedly during the chorus.)

But is the music any good? Well, this being Mudhoney, of course it is. On “Kill Yourself Live,” the stomp is accented by 60s-psych-rock organ. “Prosperity Gospel” – key lyric: “Fuck the children/Screw your planet/Get rich/you win” – Rocks with a capital R, as does the closing of “Next Mass Extinction.” “Nerve Attack,” the album-opener, is a beautiful, edgy piece of post-grunge rock, complete with trashy guitars and a hip drumbeat. And, man, these guys still know how to title a song. (Exhibit: “Hey, Neanderfuck”) Yeah, yeah, yeah, the somewhat anti-climactic closer, “Oh Yeah,” is too short but, if that’s your biggest gripe with the record, I think we’ve got it pretty good, don’t you?

On Digital Garbage, Mudhoney continues to prove it’s not resting on its laurels; 30-odd years in, they sound better and more engaged than acolytes half their age. I question whether Digital Garbage has the long-term shelf life of a record like Every Good Boy Deserves Fudge precisely because Arm has chosen to lace the new record with timely (and bigly) invictives. But these are dire times, indeed. And if angry men like Mark Arm aren’t leading the charge against the consensus wisdom (I use wisdom hesitantly), down what road to hell are we headed? I’ll take the new Nation-informed Mudhoney and its rage against the dying of the light. We all should be this interesting and articulate when we’re pissed off.