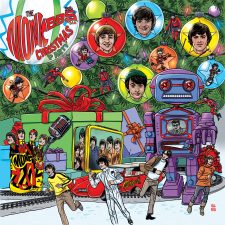 Although you’ve probably heard this joyful news by now, The Monkees are, for the first time, releasing a Christmas album, Christmas Party.  This will feature newly recorded versions of classic Christmas songs as well as new songs written for the band by Peter Buck and Scott McCaughey, Rivers Cuomo, Andy Partridge, and album producer Adam Schlesinger.

After helming The Monkees’ critically acclaimed studio album, Good Times!, in 2016, Grammy® and Emmy®-winning songwriter Adam Schlesinger reprises his role as producer on Christmas Party.  All of the album’s 13 songs were recorded this year, with “Silver Bells” and “Mele Kalikimaka” using classic Davy Jones vocals from the archives, combined with newly recorded music.

Much like Good Times!, Christmas Party features songs newly written for the band by a group of talented songwriters, including Rivers Cuomo of Weezer (“What Would Santa Do”) and Andy Partridge of XTC (“Unwrap You At Christmas”). Schlesinger and celebrated author Michael Chabon teamed up to write “House Of Broken Gingerbread.” Guitarists Peter Buck of R.E.M. and Scott McCaughey of The Minus 5 play on two songs – a cover of Big Star’s “Jesus Christ” and the album’s title track, which they wrote together.
Christmas Party also includes two songs with Michael Nesmith on lead vocals, with each track being produced by one of his sons. His take on the yuletide classic “The Christmas Song” was produced by Christian Nesmith while “Snowfall” was helmed by Jonathan Nesmith.

Track List
“Unwrap You At Christmas” (written by Andy Partridge)
“What Would Santa Do” (written by Rivers Cuomo)
“Mele Kalikimaka”
“House Of Broken Gingerbread” (written by Michael Chabon and Adam Schlesinger)
“The Christmas Song”
“Christmas Party” (written by Peter Buck and Scott McCaughey)
“Jesus Christ”
“I Wish It Could Be Christmas Every Day”
“Silver Bells”
“Wonderful Christmastime”
“Snowfall”
“Angels We Have Heard On High”
“Merry Christmas, Baby”

CHRISTMAS PARTY will be available on CD, digital download, and streaming services on October 12th, 2018.