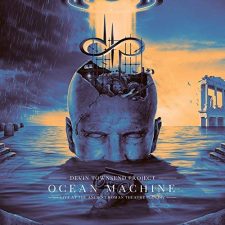 In 1996, the band Oingo Boingo released a live album aptly titled Farewell. It was a chronicle of their last show, fittingly performed on Halloween 1995. It was an opportunity to properly thank fans for being along for the ride. Danny Elfman and Steve Bartek, of course, had more soundtrack scoring to do, and the culture that supported the band’s lunatic gallows humor had changed. The album Farewell does not present radically different versions of songs from the original recordings. Indeed, that’s hardly the point. This was, in a sense, one final round and a grand sing-along before the bar closed and the sun rose.

Whether the audience in Bulgaria attending the September 2017 Devin Townsend Project concert knew it or not, the same thing was happening. As such, Ocean Machine: Live at the Ancient Roman Theatre Plovdiv is a greatest hits of sorts, a document of a creative time period coming to a close. The band makes the most of it. The resulting collection is a four-disc (3 CDs, 1 DVD) time capsule of the event, with two CDs featuring a grab bag of DTP and Townsend solo songs. The third CD is a complete rendering of Townsend’s seminal Ocean Machine album, released in 1997. The DVD features the entire event.

Ocean Machine was a pivotal release for Townsend. Up to that point, he was known as the vocalist for Steve Vai’s Sex and Religion lineup as well as the mad scientist behind the extreme metal band Strapping Young Lad. He had a reputation growing behind him that, if you read much of his post SYL interviews, indicated there was a dangerous misconception about him, one that he occasionally fed into. Ocean Machine exhibited Townsend’s more nuanced prog-metal side, showing him to not be at all afraid of tunes that were – dare I say it – kind of pop. He’d still show plenty of the fire and fury that drove some of SYL’s most memorable tracks, but Devin’s solo work afforded him something Strapping hardly could: license to exhibit range, in content, in motive, in emotion and delivery. For a period of time, both Townsend solo and SYL ran concurrently, but that had to be a grueling workload, and quite wearying for the psyche.

All this is to say that, if the Bulgaria concert is indeed the last for DTP and his muse is taking him to ever more foreign shores, this set couldn’t have been more meticulously constructed in its intent to celebrate where it, kind of, all began.

You’re not going to get earth-shattering revelations from the performances. They’re great; it’s hard to fault what the band is doing audibly, but these renditions aren’t all that different from what’s already been on record. The brilliance and disappointment of modern live performances are that technology allows one to play the songs so close to their recorded versions that the hard task isn’t to sound as close to the originals anymore, but NOT to sound like them. It’s a small gripe because, even if there’s little deviation, that still finds the 3 CDs of Ocean Machine Live to be a compact “best of” which is very portable and nicely curated.

The big value of the set is the DVD. Seeing the band pull off such audacious sounds, and in a lavish amphitheater, no less, is what you’re really putting the money down for. This is a big “thank you” to fans, and possibly only to fans. DTP exists, or existed, in an amorphous middle area. They may have been too big, too hard, and too loud for the progressive rock traditionalists. They also may not have been as skull-crushingly heavy as metal purists would demand. Strapping fans still ask when Townsend will “stop with this stuff and make a new SYL record,” a request Townsend has vigorously shot down. Yet, in that middle ground, fans found wonderful bombast, epic tracks that actually deserve to be classified as “epic,” and a self-effacing frontman who once sarcastically mused, “Well, it’s just entertainment, folks!”

True enough, and Ocean Machine: Live at the Ancient Roman Theatre Plovdiv is plenty entertaining. Pour out a final round for the Devin Townsend Project and enjoy this lavish presentation.