Def Leppard was a surprise arrival in the Rock world back in 1977. With young Joe Elliott as vocalist, and a high intensity guitarist, Steve Clark, the band immediately entered the charts with a Rock fan satisfying collection of tracks found on their 1980 debut, On Through The Night. It delivered a series of hits, some in the UK, and some in the US. The album itself was a high placement on both the UK and US charts.

With a catalog of eleven studio sets that includes the massive Pyromania (1983), with over ten million units sold, and the even greater selling Hysteria (1987), with over twenty million copies in fans’ hands, the catalog of Def Leppard is a valuable and exciting commodity. It has been undergoing an updating of which these boxed sets are a part of.

On June 1, Mercury Records will release two separately available boxed sets, one for CD, and one for vinyl LP. Both sets will be known as The Collection, Volume One.

The CD Collection will be six CDs, while the vinyl box will contain seven LPs. There will a special booklet housed in the case with the discs. The Rarities disc is the catch here as it is expected to contain radio sessions from the band’s early years. For the CD Box, the EP might be included on the Rarities CD.

The albums included will be: 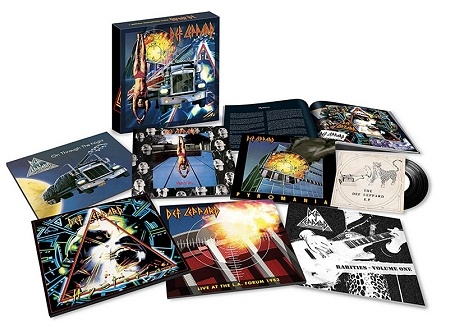