The phenomena of Ten Years After, especially during the period where Alvin Lee was an active part of the band, is historical and memorable. In fact, I STILL regularly play Recorded Live (1973) and consider it one of my favorite Live albums from a band. Ten Years After were active up until the 1974 breakup of the original powerhouse band. Their final album from that period was Positive Vibrations, released in 1974.  Ten Years After returned in 1989 with About Time. Regardless of any outcomes, Ten Years After is in our consciousness even after 40+ years. 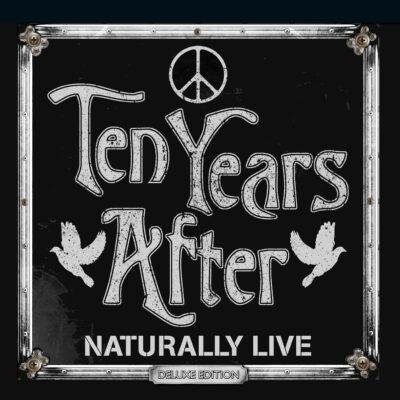 On August 13, Deko Music will release a Deluxe Edition of a 2019 issue, Naturally Live. The album features 12 live performance tracks with two bonus tracks for this reissue. The show was recorded from a March 24, 2018 concert in Erfurt, Germany at The HsD, otherwise known as Museumskeller und HsD.  Naturally Live was recorded from a show on the support tour for A Sting In The Tale (2017). Currently, the touring Ten Years After are original drummer, Ric Lee; original keyboardist, Chick Churchill; guitarist, Marcus Bonfanti (since 2014), and bassist, Colin Hodgkinson (since 2014).