For anyone who remembers the promise of Steve Forbert that emanated liberally from his stunning 1978 folk/rock debut classic, Alive On Arrival. At the young age of 24, Steve Forbert brought a new folk legitimacy to NYC. His songs spoke of big city love, one that developed in small town Meridian, MS and naturally emigrated to The Big Apple. That respect, awe, and love reveals beautifully on “Big City Cat”, and more notably, “Grand Central Station, March 18, 1977”. Over the years, Steve Forbert has released 19 albums that includes Alive On Arrival, and Jackrabbit Slim (1979). “Romeo’s Tune”, is his top-selling hit from Jackrabbit Slim classic. 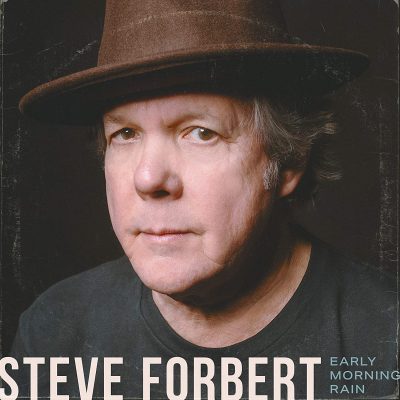 On May 8, Steve Forbert releases his 20th studio album, Early Morning Rain. It is a collection of cover songs that feature his distinctive voice bringing a refreshing new life to many favorites including a haunting new version of “Good Time Charlie’s Got The Blues” (hear below). Other reinvigorated gems include covers of “Suzanne” (Leonard Cohen), “Your Song” (Elton John), “Withered and Died” (Richard Thompson), “Box of Rain” (Grateful Dead), and “Frankie and Johnny” (Johnny Cash) to hint at. Early Morning Rain releases via Blue Rose Music on CD and DD.

If you’re unaware of Steve Forbert, let me lead you to Alive On Arrival, which should be more than adequate enough to move you forward.