Rickie Lee Jones captured attention with her self-titled debut Warner Brothers album, along with the hit single, “Chuck E’s In Love” to buoy it. For me, it was love at first listen. Since, I’ve been an avid Rickie Lee Jones fan. And while she kept the rapt attention of die-hard fans, her stock fell with the record-buying public providing only Gold status for her second, Pirates (1981), with one more Gold designation for a later Flying Cowboys (1989), released via Geffen Records. In all, Rickie Lee Jones has released fourteen studio sets, her last being The Other Side of Desire in 2015. Some of these were covers sets. 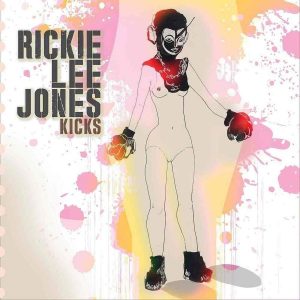 On June 7, Rickie Lee Jones revisits the covers practice with a collected set of popular tracks (see list below). Kicks will be released on CD, DD, and vinyl LP.

To date, there are two pre-release singles with “Bad Company” (Bad Company), and “Lonely People” (America).

It’s great to see the Duchess of Coolsville back where she belongs. Let’s have an original next go-round!